After reviewing my video stitching experiment I came to the conclusion that in order to be really impressive the camera really has to move. Obviously this leads smoothly into another experiment. The results are more interesting than the first but I must say much less successful. I mounted the cameras on my homebrew fig rig and continued  my Shoreline theme. This is what it looks like.

As with my first experiment, this is assembled with premiere Pro. Starting with a simple pan across the rocks the first problem is immediately apparent, there’s a severe exposure mismatch. As the camera swungs around and the light evens out at about 15 seconds the scene looks pretty good. I could’ve corrected this by applying a brightness/contrast adjustment to both frames and animate the adjustment to follow the  changes, but life is just too short. The mismatch starts to show again at about 24 seconds.

At 33 seconds I cut to a moving shot walking across the beach, exposure mismatch is still present but a few more flaws come to light as well. The walking introduces a vertical motion since the cameras are obviously not synchronized the corresponding frames on the left and right are actually captured at different times since I’m shooting at 10 frames per second synchronized to the nearest frame the difference can be up to 1/20 of a second. In the almost completely stationary shot of my first experiment this isn’t apparent at all, however with the fast vertical pan the problem is severe.

Further I believe this effect is responsible for the small misalignment of the waves in the bottom center of my first experiment, I could never get those to align quite right.It might be possible to correct this dynamic misalignment by stabilizing the videos in After Effects before stitching them together however, a far better solution would be to shoot the video at a higher frame rate. If shot at 60 frames per second as is commonly available in better quality consumer cameras, I don’t think the effect would be noticeable. It’s definitely a lot more work to fix it in post at any rate.

At 1 min. I begin to walk down the steep bank to the waters edge. The horizon moves up to top of frame revealing a very distracting distortion. I thought at first this was lens distortion taking effect at the edge of the camera’s field however it’s actually a perspective distortion. As the rig as a whole tilts down in the pitch axis each camera rotates in the roll axis with respect to its Horizon. Thus, in this configuration the rig must stay level for convincing output. 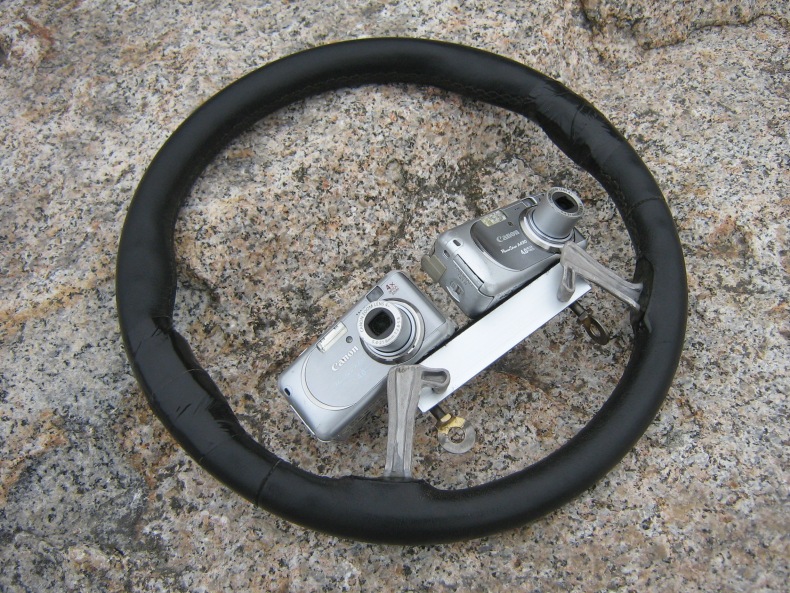