There doesn’t seem to be a whole lot of information online on the subject of installing a real operating system on popular sub-notebook computers. These handy little machines inevitably come with Windows 7 starter installed, the manufacturer seems to believe this is all a computer needs, it’s my opinion that seven starter is only appropriate to assess the quality of the screen before purchasing, you bring it straight home and put a real operating system on it whether it be win7 home or professional or your favorite flavor of Linux (if you’re into that). emachines actually declined to answer a driver related question on the grounds that I had installed an unsupported operating system, that’s not the way I see it.

The most common method, these days of installing Windows on a machine with no removable media drive seems to be to transmute the Windows CD onto a bootable USB thumb drive. Perhaps it makes me a failure is a nerd but I’m just not feeling it. Even with software tools various companies have developed specifically for the purpose it takes quite a bit of fiddling to get a working bootable copy of the modern Windows kernel onto a thumb drive. It’s just too much effort and not enough reward for my taste.
My approach is to use a standard everyday CD drive, plugged into USB using an IDE/ATA/SATA to USB adapter, similar to this one. I got mine on eBay from a seller in Hong Kong for about $8 shipping included, it’s most likely a counterfeit version of a unit some American company sells for $40 however it works just fine.

After a quick visit to the bios to make the CD drive the primary boot device the installation is smooth and uneventful. It should be noted that this adapter translates the true identity of the device it’s connected to, I used some such adapters where anything plugged into it shows up as a generic mass storage device, not the case here. This means you can plug it into a CD burner and actually burn CDs with it, or plug in a hard drive and remove and re-create its partitions. It also means it shows up in the bios boot device list as USB CD-ROM drive which you can leave the primary boot device without having the computer attempt to boot off of every thumb drive you inadvertently leaving in it. 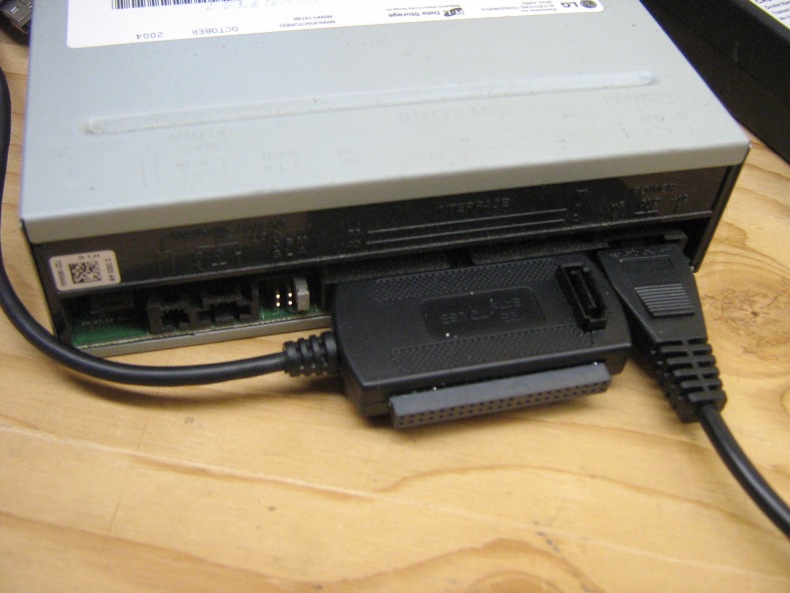 The install completed with only two unknown devices, one being the wireless network adapter which Windows had no trouble digging up a driver for with a click of the update driver button. The other is the graphics adapter and that one is the source of my being peeved at emachines.

The driver provided on the downloads page does not say what operating system it is for(I know now that this is because Windows 7 starter is the only supported operating system for this computer) when you attempt to install this driver(either version), you Get an uninformative error saying your machine does not meet “minimum system requirements”. I e-mailed them, assuming there is a simple technical glitch in their webpage and that they would reply with a link to the driver I needed. In the reply I received however I was very politely told off for having installed an unsupported operating system on my machine!

A little bit of additional googling led me to an excellent review on notebookcheck.com that identified the graphics hardware used in the machine. One more consultation with the old man Google brought me straight to Intel’s driver download page and I was up and running in a snap, no thanks to emachines.